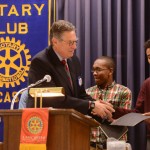 There were a few moments that changed the lives of a handful of people in Lancaster. But they weren’t just any moments – they were special ones.

And they weren’t little changes, they were transformative.

The first one came several years ago when Rich Wolman was at a Lancaster Rotary Club meeting, listening to a former superintendent of the School District of Lancaster talk about alarming rates of dropouts, of poverty and homelessness for students in the district.

“Something’s got to happen here,” thought Wolman. “We have to do something about these problems.”

And by “we,” he meant himself and the people sitting in the room.

From that moment on, Wolman went about establishing a mentoring program between students in the career tech progam at McCaskey East and willing mentors from the Rotary Club and community.

Although a smaller pilot program launched its seniors last year, the first 31 students to go through the mentoring program were honored Wednesday at the club’s meeting.

And the 11 seniors officially graduated from two full years of mentoring.

The Rotary Club hopes to have a full complement of 40 students in the program next year and is looking for enough mentors to guide the students – a factor in breaking the cycle of poverty.

A critical moment for change was when each student decided to enter the program, as a mentee. Many of them say it helped them in ways they never imagined.

“My teacher asked a few of us if we wanted to volunteer for a great program,” said 17-year-old La’Detrius Sibley. “I knew I needed guidance. I needed someone to help me stay on track and teach me what I need to do, so I know – down the road – how to act.”

The high school junior said he is so glad that he decided in that moment to join the progam and he would encourage others to do it as well.

Sibley plans to go to college for business and accounting. He wants to be a financial advisor “down the road.”

He calls his mentor, Robert Beers, an architect, a “terrific guy, an honest guy” who has taught Sibley to follow the rules and to do as he is told by whoever is in charge.

Beers is taking two of the students who are interested in architectural drafting to job-shadowing days. He has helped them with college applications and given them encouragement and guidance along the way.

Last week, the group was having one of its last team-building exercises for the year. Each group, coached by their mentors, had to figure out how to stack 10 cups as high as possible without touching them.

They had two strings, some paper clips and a rubber band to figure out how to make it happen.

The competition was intense but the camraderie and encouragement within the groups was a demonstration of the strength of their relationships.

Erin McFalls is a teacher at McCaskey East and one of the coordinators of the program.

“I think the kids are building relationships,” said McFalls. “They are learning how to communicate with adults, manage adult relationships and emotions and problem solve.

“I also see that they are learning a work ethic, learning employability skills,” she said.

“It’s just so beneficial for the students to have those conversations with successful adults.”

“They asked us, ‘do you want to have a mentor?’ and I made the choice right away,” said senior Brittney Abreu, 18, who is in the early childhood education program at McCaskey East.

Abreu has a plan now.

She is going to HACC’s Lancaster campus for an associate’s degree in early childhood education. She’ll finish her degree at Millersville and become an early childhood teacher. But eventually, Abreu wants to own her own daycare facility.

Abreu graduated from the program Wednesday and couldn’t be happier that she made the decision to join.

“Every month you have a choice to have a one-on-one mentor,” explained Abreu. “They tell you how to handle yourself in the real world. You get a lot of support for decision-making. It’s opened things up for me in a lot of ways.”

Kellem Gray, who wants to be a senator someday, thanked the Rotarians for the program and for “showing up out of their busy days” to mentor.

“I’m learning how to be a better man,” said Gray, “to think before I react and to make better choices.”

When Gray graduates from college, he will be the first in his immediate family to do so.

His parents, David and Kenya Smith-Gray attended their son’s two-year graduation from the mentoring program.

“I think if I had had a mentor in high school, I would have gone in a different direction,” said Smith-Gray, a medical transcriptionist.

Wolman calls the transition from high school to higher learning “humps” that some kids need help to clear.

“Some of these students come from difficult backgrounds where a leadership parent is not there,” said Wolman. “But if they could just graduate and go on, there are good-paying jobs sitting out there, waiting for them.”

Wolman tells the story of one kid who wanted to go on to college but knew nothing about the SATs (Scholastic Aptitude Test for college entrance) and his mentor got him into an SAT prep class and got him signed up for the test.

“Some of these kids want to study the construction trades and they don’t have enough money for tools or the required steel-tipped boots,” Wolman said. “To study cosmetology, you need a kit costing $100 and that’s discouraging when you don’t have it.”

Wolman sees this as a critical point.

“It’s where the rubber meets the road,” he said. “They can either fall back into a poverty cycle, or we can try and get each student we can over that hump and graduate.

“It starts with one.”

Kellem Gray agreed and is especially proud of the slogan he made up to go with his graduation.

“Life isn’t a matter of the milestones,” said Gray, “but of the moments.”