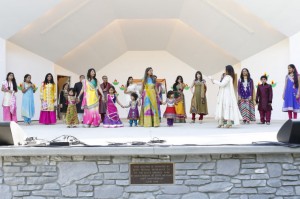 Deepa Balepur, president of the Indian Organization of Lancaster County, was one busy lady on Saturday, when IOLC hosted its first-ever Mela, or festival, in Lititz Springs Park.

Between greeting guests, chatting with acquaintances and going around with her clipboard to make sure the event was going smoothly, she had the time to reach into her wallet, grab a $20 bill and hand it to her son, Nishant, so he could fill up on some curry provided by Tulsi Indian Cuisine on Columbia Avenue.

“They’re going to get hamburgers,” she said, laughing at the fact that her son decided against the Indian food for some old-fashioned American cooking. “He would have loved the curry, but the line was too long.”

Beginning at the start of the festival at 3:30 p.m., there was a constant line for the Indian cuisine, with guests waiting up to an hour for their fill of Indian favorites that included curry, chickpeas, mixed vegetables or even gulab jamun — milk puffs soaked in sweetened rosewater-honey syrup.

“It’s very good,” said Mary Lee Nissley, a patron from Bainbridge who has really gotten her fill of Indian culture of late — literally and figuratively — as she finished a month-long vacation to India in March.

“Indian food is wonderful,” Nissley added. “It’s a bit spicier than the food here in the United States.”

After sitting in the shade and enjoying their meals, visitors could burn some of the calories off with yoga sessions, try on some vibrant-colored Indian clothing and jewelry, get their faces painted or participate in a variety of artistic Indian practices such as henna tattooing and rangoli — artwork using flower petals, rice and other everyday materials.

“It’s a hands-on experience of Indian culture,” Balepur said of the event, which was free to the public. “It’s open to all. That’s the real joy and fun element of it.”

Starting around 5:30, a fashion show and talent show gave participants young and old a chance to entertain, but also to educate.

“I just want people to know that it’s really different from American culture,” said Sneha Mittal, a 14-year-old dressed in elaborate garb for the fashion show, as well as emcee for the talent show. “I think it’s a really neat way to show Indian culture.”

After all, when the lines have dwindled and the music has stopped, that’s what IOLC hopes to have accomplished with the event.

“The kids get to learn a lot. It gets to be educational,” Balepur, a native of Mumbai who came to the States in her early 20s, said.

Balepur and IOLC hope to continue providing events like Mela in the future, after luring in more than 400 guests on Saturday and nearly as many in March at the UTSAV Indian arts festival at Millersville University’s Ware Center in downtown Lancaster.

“It was completely sold out with a waiting list. It was definitely a good surprise,” Balepur said of the arts exhibit. “The response with this event has been more of a surprise.”

Balepur has been pleased that Lancaster has welcomed the burgeoning of Indian culture with open arms — as the long lines suggest.

“Lancaster is home. This is where we are,” she said. “We’ve been open-heartedly welcomed.”

With the Lancaster area opening up to more cultures, Balepur says it is the city that will also benefit in the long run.

“With cultural awareness (and) richness, a county becomes a place where people want to be,” she said. “There’s something for everybody, no matter your background or where you’re coming from.”

For updates on future opportunities to be both entertained and educated by the local Indian community, visit the organization’s website at: