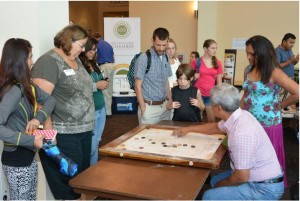 Indian culture, from the food to spiritual beliefs to the way people dress and dance, was celebrated at Millersville University Saturday afternoon.

Namaste, an Indian Festival, was held in the Student Memorial Center.

“The world has become a much smaller place,” says Deepa Balepur, president of the Indian Organization of Lancaster County and one of the organizers of Namaste, which is a traditional Indian greeting.

“It you want people to understand your culture, invite them in. We want to build good friendships.”

“Integration is the key, said Nazli Hardy, a professor of computer science at Millersville University, who came up with the idea of the festival and helped to organize. “It’s been wonderful.”

While the event was free, participants were asked to register, which approximately 700 people did.

Vijay Mandewal was showing visitors how to play carrom, a traditional Indian game similar to billiards, but in a smaller format.

In college he played on the national level.

His wife, Darshana and his daughter, Aishwarya, were watching.

The family moved her three months ago and are finding Lancaster County to be “very interesting and welcoming,” according to Darshana.

It is a temporary tattoo done for special occasions, such as weddings, baby showers and birthday parties, often on the hands and feet.

“It’s very common in India,” she said as several people were looking at the intricate designs she can do. Before too long, Arora was creating a design on a woman’s ankle.

“Depending on how much you wash your hands, it can last about two weeks or so,” she said.

“We are big fans of Indian food,” said Jessica Darrenkamp of Lancaster, who was their with her husband, Jared and their son, Wyatt.

Wyatt, she said, also was interested in the traditional Indian games that were being played.

Shyam Kumar Das, a member of the International Society for Krishna Consciousness, stood by a table filled with books about Krishna.

“We are spreading the ancient wisdom,” he said. “Simple living — high thinking . Slow down and look at what is important instead of following the crowd.”

He noted that more and more people are opening up and inquiring about things related to Krishna, who lived 5,000 years ago. That includes learning about yoga and meditation, both of which were offered at the festival.